For over 20 years, Fran Scuderi has been entertaining crowds from as far north as Denmark, to the tropical breezes of the Caribbean. Having regular engagements in Copenhagen, Bermuda, The Cayman Islands, The Virgin Islands, Colorado and Washington, D.C., Scuderi has been continually refining his unique ability to please a crowd no matter how big or small. 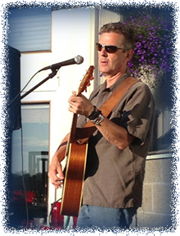 “It’s not the size of the crowd that makes the gig,” he states, “it’s their willingness to become involved. My job is to create an atmosphere that encourages that involvement. Audience participation ranges from relaxed listening to the antics of having ‘stage aliens’ come up and sing a song or play the tambourine. I have a crazy sense of humor,” admits Scuderi, “so I prefer the light-hearted interaction. That’s one advantage as a solo performer, there’s more flexibility through the course of a show, but the mood can vary from set to set.” But no matter what the mood, Scuderi’s motivation is clear. “It’s all about emotions,” he says, “whether it’s laughter or tears, riding that wave of communication with a crowd is what keeps me doing what I do. When it stops being fun then it’s time to quit.”
Having opened for Mary Chapin Carpenter, Johnathan Edwards and Hootie and the Blowfish, Scuderi is eager to climb the ladder of success. He is currently recording his new CD titled “It’s About Time”. Although the title infers several meanings, the song “It’s about Time” speaks of moving on and letting go. But the phrase is very appropriate. “I’ve often thought the CD should be entitled “It’s about Damn Time”, but that narrows it down a bit.” He grins, I’m hopeful this CD will be well received. We’ll run it up the flagpole and see how it flies. I have to finish it first. Working 5 to 7 nights a week has made it a stop and go effort, but it’s coming along. From festivals and concerts to smaller club venues, what radiates most from Scuderi is his desire to reach out to the crowd. Whether it’s with a song or with his sense of humor, his veteran style of entertaining is a sure bet for a night of music and enjoyment. 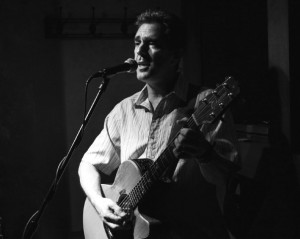